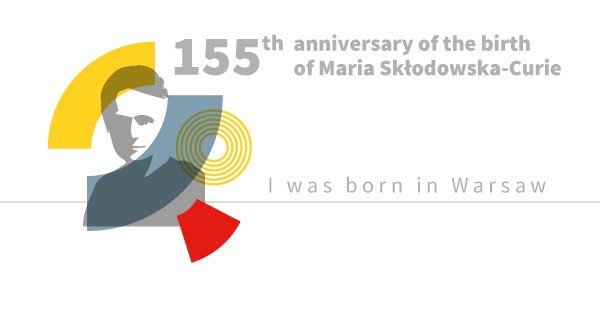 An excursion with Maria

Poland has always brought up to big names of mind globally known personalities, such as Fryderyk Chopin, Pope John Paul II, Lech Wałęsa and Maria Skłodowska – Curie. Although the latter is still considered by many to be French, we are proud of her Polish roots, Warsaw being her hometown.

On the occasion of her 155th birthday we would like to take you on a walk with Maria and show you places which were especially dear to her. We also hope to inspire the visitors to follow our recommendations in the Polish capital. Hopefully they will become a must-see on every Warsaw sightseeing list! 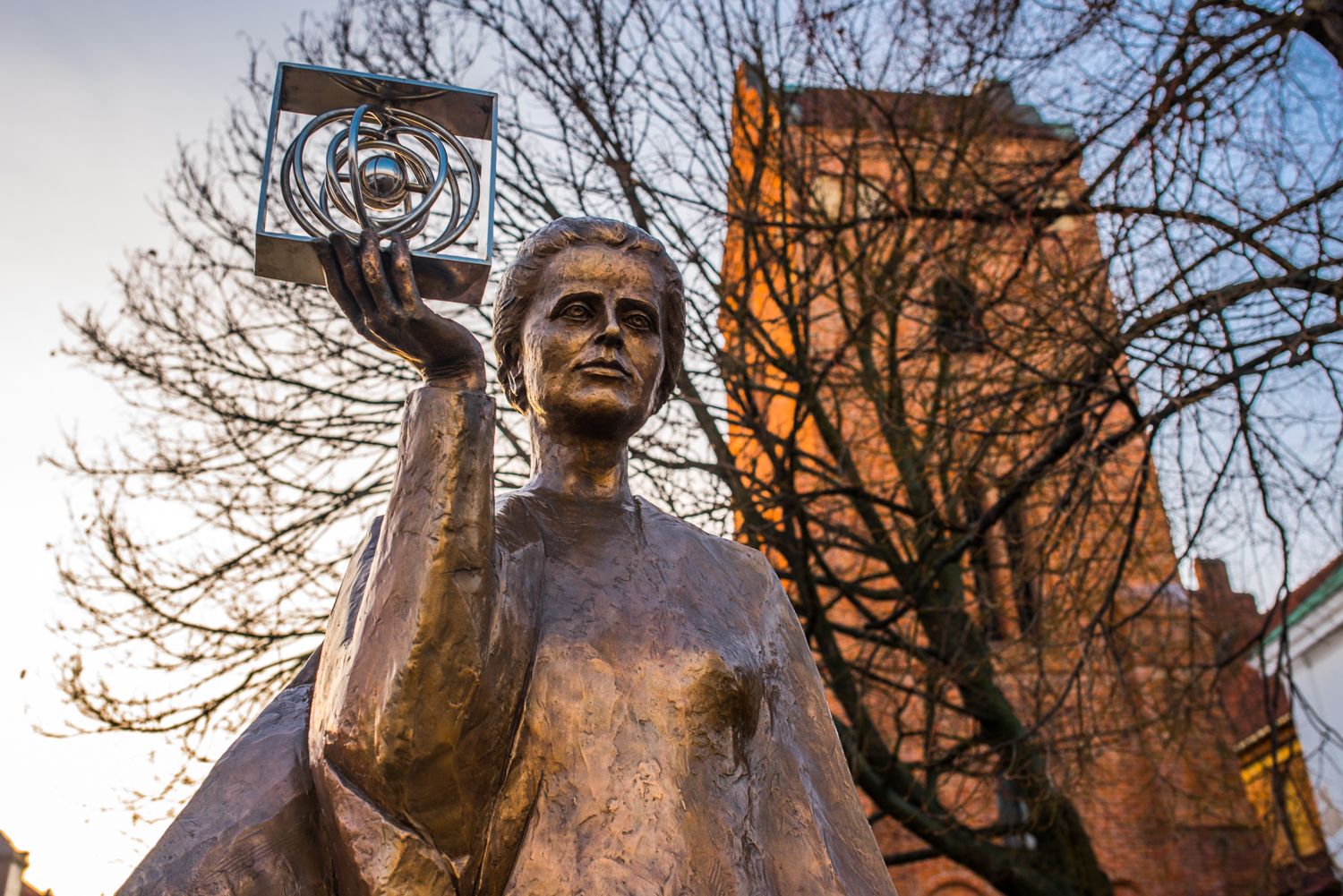 Maria was born on 7th November 1867 in an XVIII-century tenement house in Warsaw’s New Town at 16 Freta street, as the youngest of five siblings. Her father, Władysław Skłodowski, was an educationalist, and her mother, Bronisława, ran an upper-class girls’ boarding school. The building now houses the only biographical Museum of Maria Skłodowska Curie in the world. It displays a collection of precious memorabilia, notes, letters and personal items which belonged to her. It also hosts educational and cultural projects related to the life of the famous female scientist and a Noble Prize winner.

In the vicinity of Maria’s family home you can see  Warsaw’s Barbican (Barbakan) – a defensive wall with a tower which constitutes a gateway between the Old and New Town. The brick gothic building is surrounded by a moat – a part of Warsaw’s medieval fortification. Constructed in 1548 – 1550, it was destroyed during WWII and rebuilt together with the rest of the Old Town. Currently its interiors house an exhibition portraying the walls’ transformation over the course of centuries.

8/10 Freta Street is the address of St Hiacynth’s Church, founded by the Dominican Order, where young Maria received her first Holy Communion. 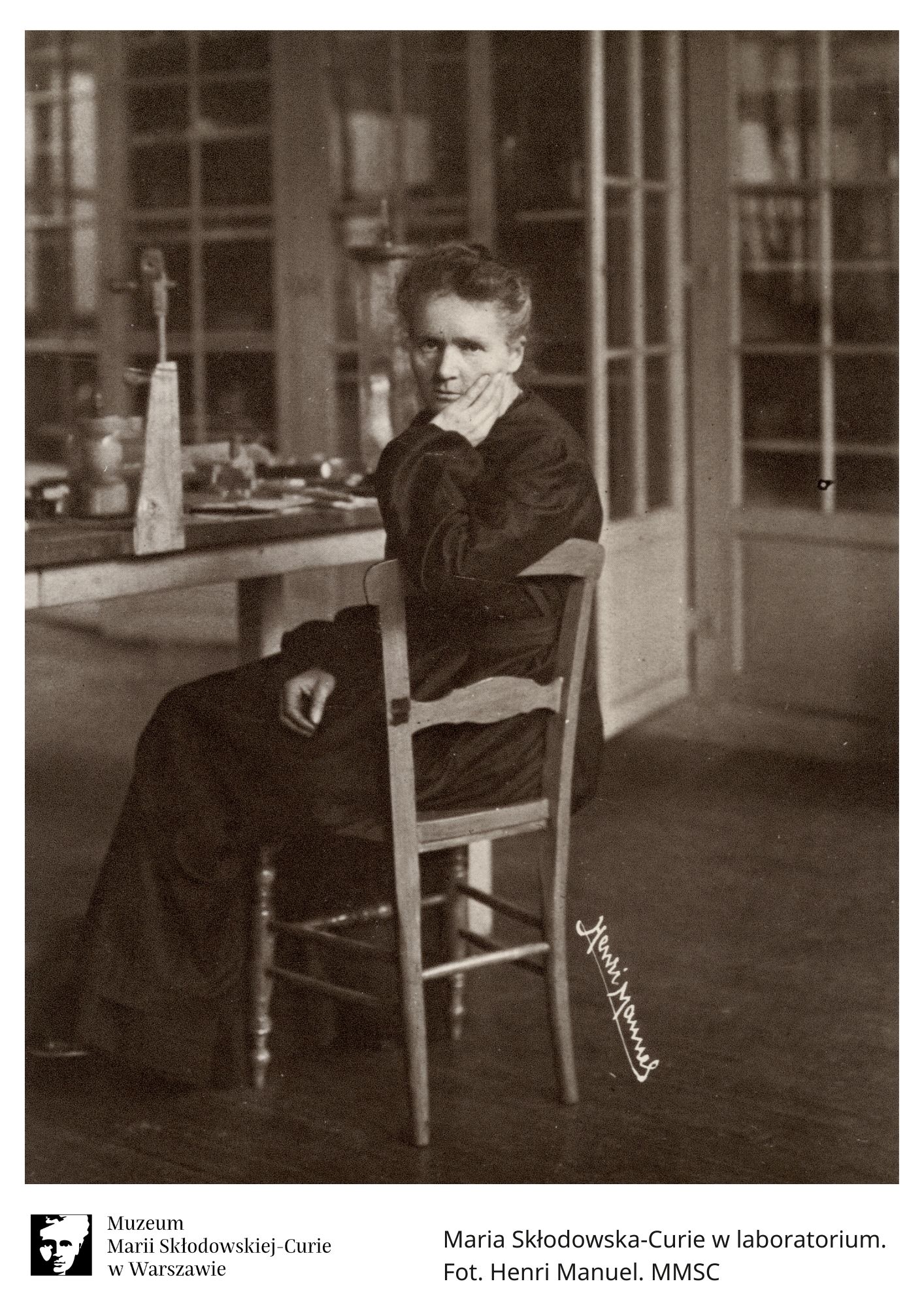 Maria and the family for many years also lived at 11 Nowolipki Street in Muranow – a neighbourhood which after WWII was rebuilt over the ruins of the Warsaw ghetto. In the last few years it has seen a rise in street artwork appearing on the building walls, archways and inner courtyards. Many of them present figures related to the local history,  such as Ludwik Zamenhoff, Janusz Korczak or Marek Edelman, others vivaciously abstract. Local guides lead informative tours following the street art trail. 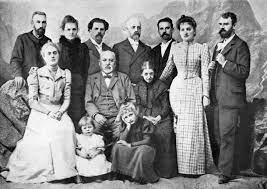 Maria enjoyed active leisure a lot – especially bike rides and long walks along the Vistula river. Her statue, next to the Church of Visitation of the Blessed Virgin Mary, commemorates her affection for spending time outdoors in that area. Its location offers sweeping views of the Vistula River and its right river bank. Two years before she died, Maria wrote: „(…) I went on a lonely walk towards Wisła (Vistula). This river has a charm, the nature of which I cannot even comprehend”

New Town Market Square was rebuilt after being destroyed completely during WWII, with the reconstruction of most tenement houses inspired by the XVIII century classicist style. It’s worth stopping by a mid-XIX century well, eclectic in style and featuring a New Town emblem: Lady with a Unicorn. The hilltop location offers great views over the Multimedia Fountain Park – it’s a great spot to watch a sound and light show in the evening. 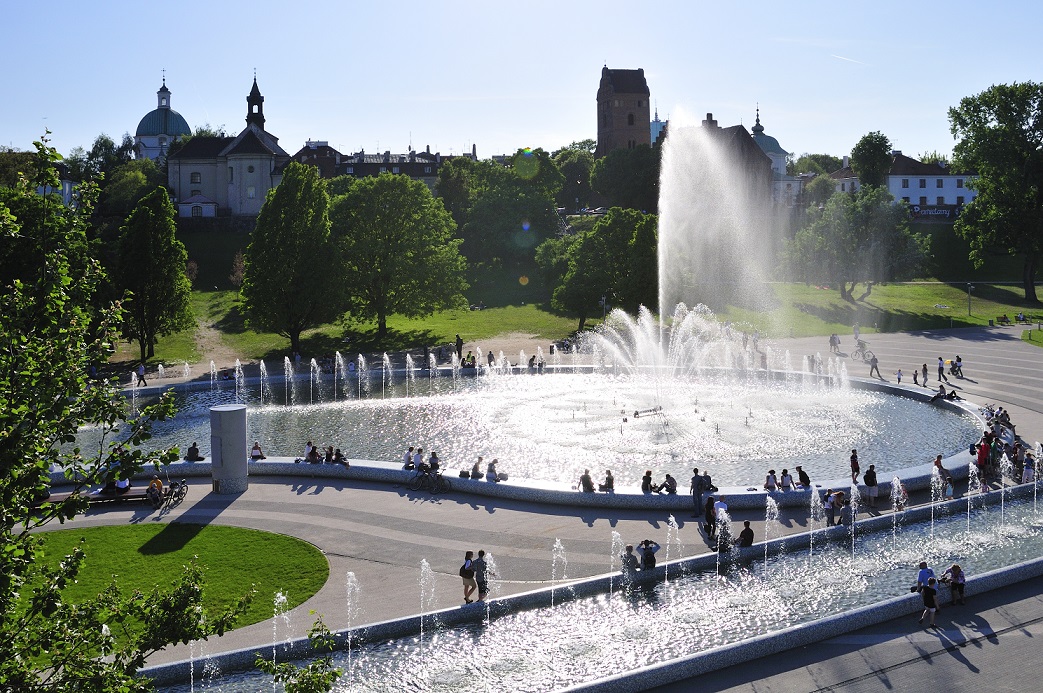 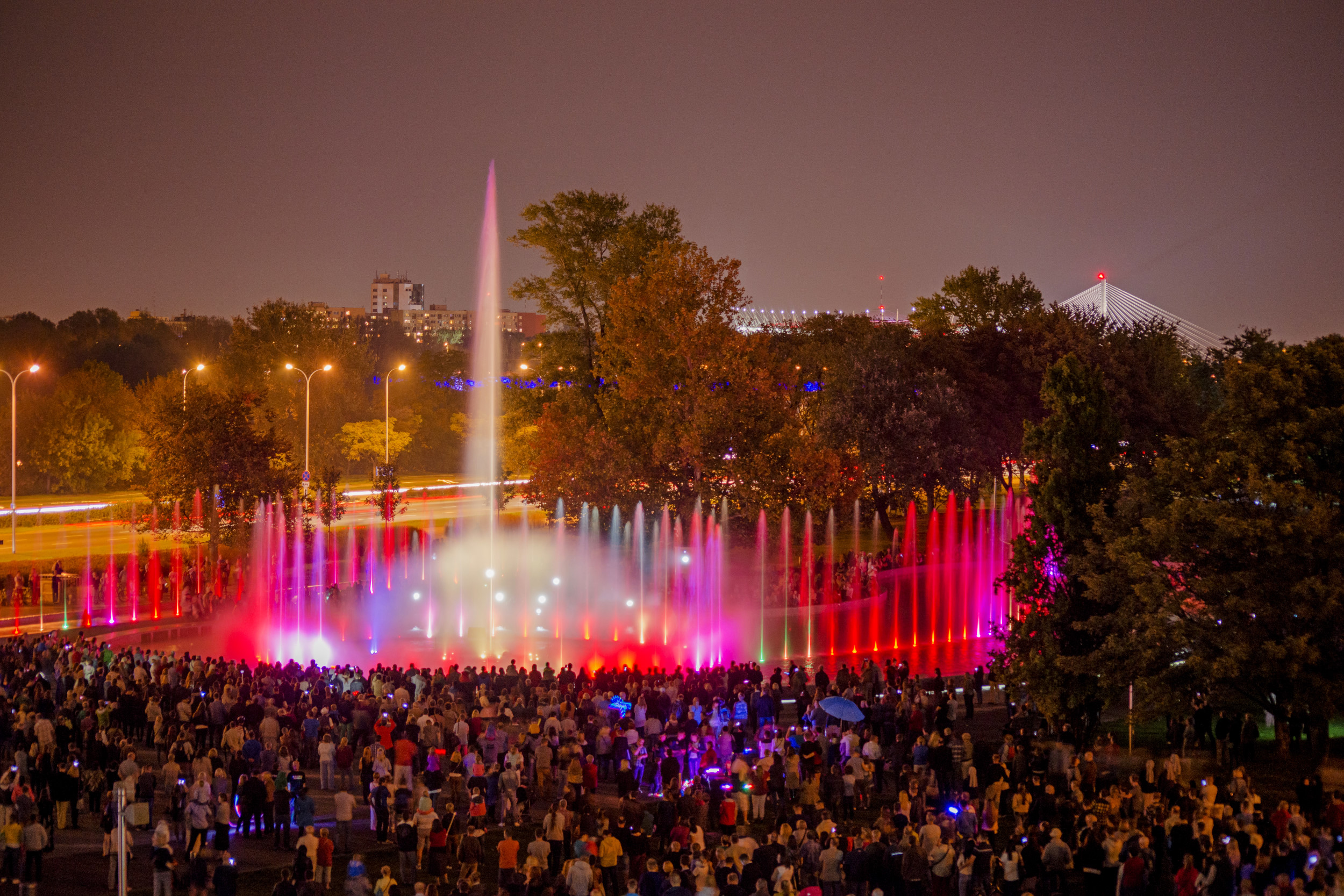 Bristol Hotel is one of three historical hotels in Warsaw which were fortunate enough not to be destroyed during the war. It is considered to be an outstanding example of art nouveau and its art deco interiors are second to none. Situated on Krakowskie Przedmieście 42/44, right next to the Presidential Palace, it’s been visited by many great personalities over the years such as Mick Jaggers, Naomi Campbell, Margaret Thatcher or Pablo Picasso. One of the shareholders was Ignacy Paderewski – a pianist, politician and a businessman. Bristol Hotel hosted many memorable banquets, including the one with the celebration of Maria Curie’s noble prize. It’s also here where a farewell ball was held for Jozef Pilsudski when he was quitting politics in 1923. Today the hotel is open not only to visitors from outside, but to varsovians alike, who on special occassions treat themselves with freshly ground coffee and sublime desserts at the much famed Cafe Bristol.

The grand classicist Presidential Palace located next to the Bristol Hotel at 46/48 Krakowskie Przedmieście has as of 1994 served as an official headquarter of Polish President. Across the street you will see the oldest arts academy in Poland – The Academy of Fine Arts (ASP), housed in the Czapski Palace on Krakowskie Przedmieście 5. It’s also a delightful part of the Royal Route to stroll along. 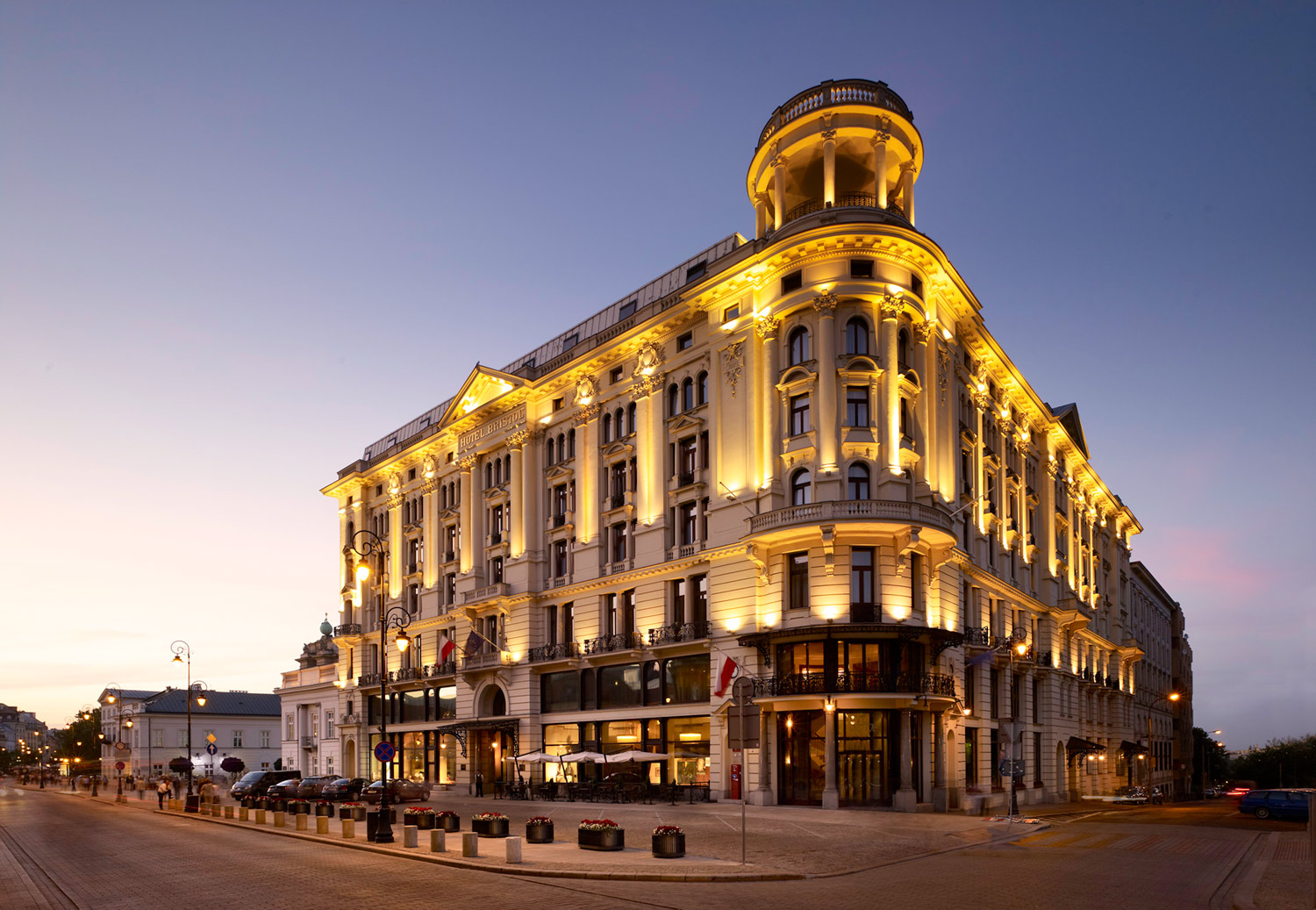 University of Warsaw, established in 1816, is one of the oldest, the biggest and the most famous universities in Poland, offering over 100 different faculties to more than 40,000 students. It was here, where Maria Sklodowska Curie gave an enthusiastically received lecture on radioactivity in 1925. Maria was an honourable member of Warsaw’s Science Society.

In close vicinity of the University you’ll find the most recognizable square in the city  – Plac Piłsudskiego with the Tomb of the Unknown Soldier, which is the venue of memorial services, state events and military parades. It’s also the place where the popular change of guards takes place every day at every sharp hour throughout the day. It was here, where Pope John Paul II and Benedict XVI gave their sermons whilst on pilgrimages in Poland. Back in the day the square fronted the grand Saxon Palace, which did not survive WWII. 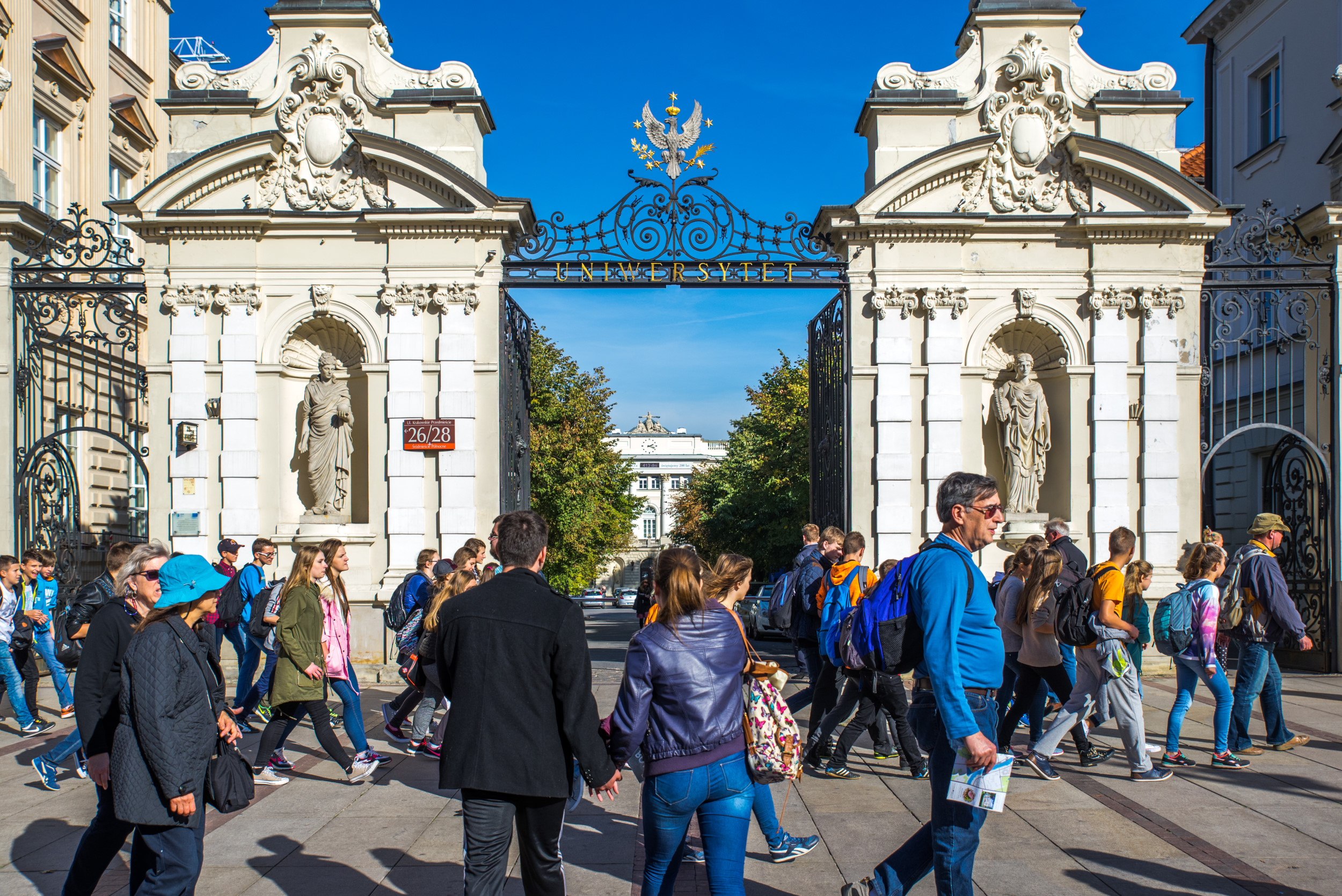 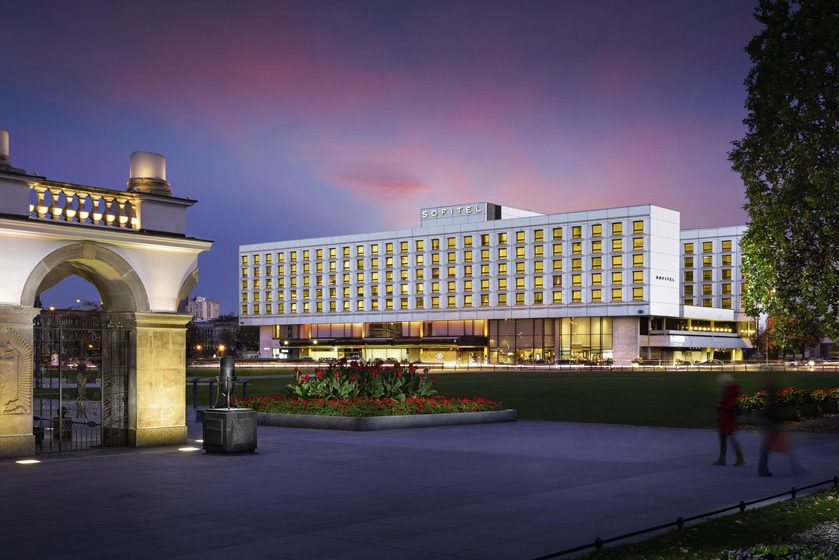 Polish Academy of Science (PAN) occupies the Staszic Palace at 72 Nowy Świat, designed by Antonio Corazzi and built in 1820-1823 for the Royal Society of the Friends of Science. It’s in this building, which now serves as background to annual Christmas illuminations, where in 1925 Maria Curie gave a lecture about the Radium Institute in Paris. She campaigned for establishing a similar institution in Poland. In 1997 one of the halls in the Staszic Palace was named after her.

In front of the Palace you’ll see a statue of a great Polish astronomer – Mikolaj Kopernik. Carved in bronze by a Dutch sculptor Berel Thorvaldsen, Copernicus holds a compass in his right hand and an armillary sphere in the left one.

You’re only one metro station away from Copernicus Science Centre – one of the biggest venues in Europe for the enthusiasts of physics, chemistry and all sorts of scientific experiments. The centre is situated on the Vistula River Boulevards, much loved by tourists and locals alike, as well as couples, cyclists, rollerskaters and buskers. As soon as the weather permits numerous outdoor cafes and restaurants start popping up. The statue of the Warsaw Mermaid is a must-visit selfie spot. Warsaw Boulevards stretch all along Warsaw’s left bank of Vistula River, from Cypel Czerniakowski (Czerniaków Promontory) to the Żoliborz beach. 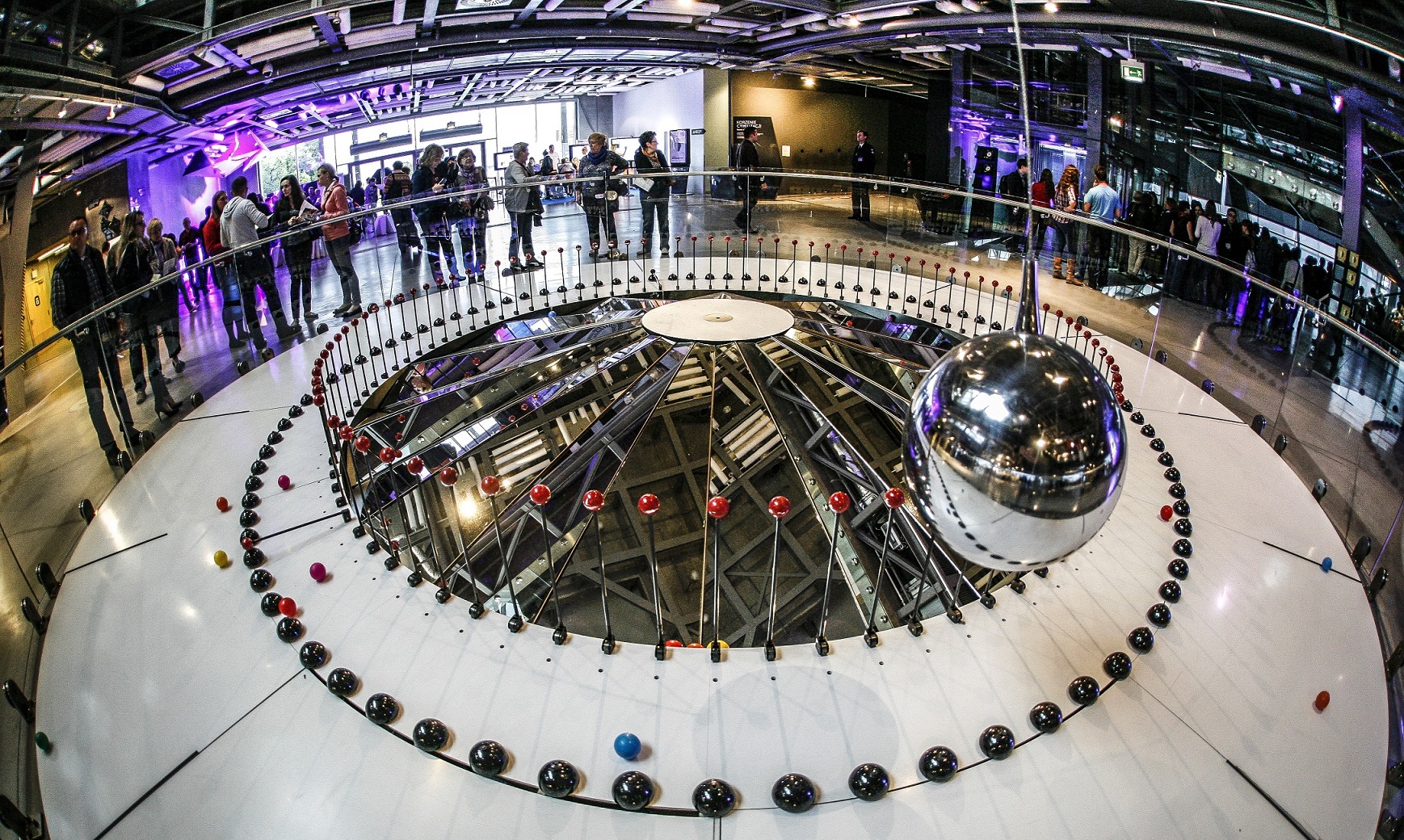 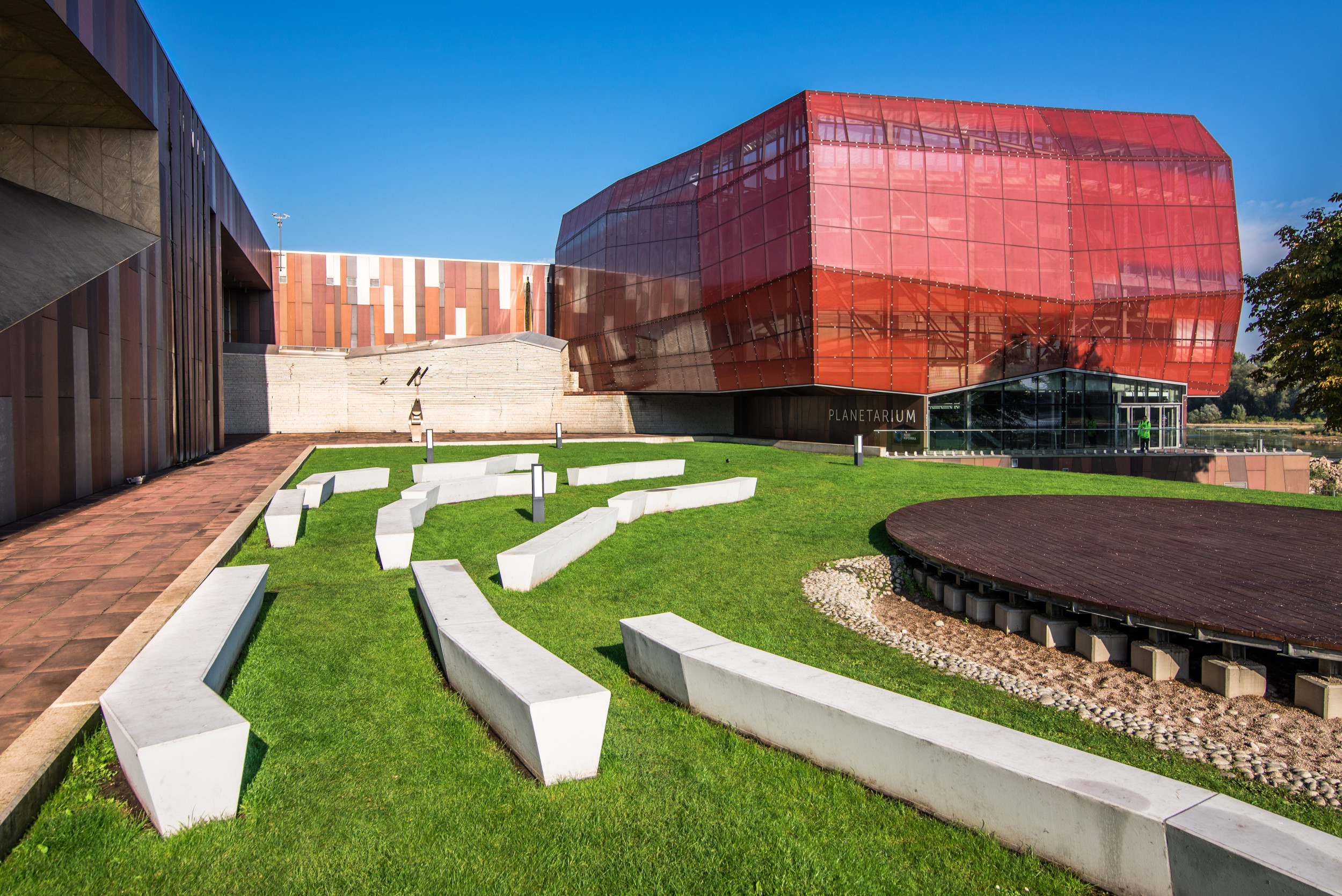 Warsaw University of Technology established in 1915 by the Science Society is one of the biggest and the best universities of this kind in Poland and Europe. More than 30,000 students attend over 60 courses it offers.

In 1925 Maria was a guest of the University and was granted the degree of honoris causa of the Physics department a year after. Her bronze statue  appeared in the main lecture hall of the main building.

You’re just a short walk away from Plac Zbawiciela (Saviour’s Square), known for its trendy cafes and restaurants, and Plac na Rozdrożu – a gateway to Royal Łazienki Park. The summer residence of King August Poniatowski with historical gardens are a must see, as are Sunday outdoor piano recitals, which take place in the summer at the famous Fryderyk Chopin’s monument.  The neighbouring Botanical Garden will be an additional treat for nature lovers. 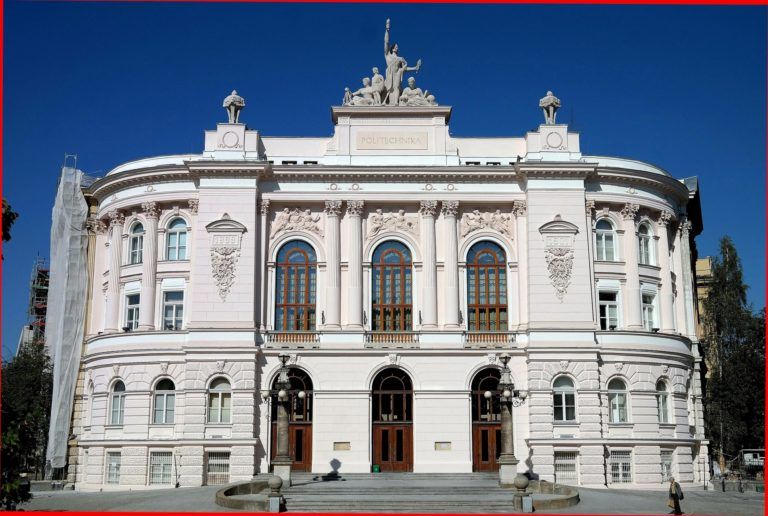 Central Agricultural Library (or Museum of Industry and Farming before the war) can be found at Krakowskie Przedmieście 66. In 1890-1892 Maria organized a physics lab at the Museum, where she carried out experiments on isolating radium and polonium – events which were commemorated with a bronze plaque on the building’s facade. Unfortunately both the buiding and the tablet were destroyed during the war.

Warsaw’s Old Town is the historical centre and one of the oldest parts of the city, established in XIII century as the principality stronghold, surrounded by defensive walls. Almost completely destroyed during WWII, thanks to an excellent reconstruction work it was enlisted as the first of its kind UNESCO Heritage site in 1980. Now it’s a cheerful and vibrant area to walk around, full of galleries, cafes and restaurants. Key monuments are Royal Castle, Sigismund’s Column, Basilica of St John the Baptist, Old Town Market Square, monument of the Warsaw Mermaid, Museum of Warsaw, Kamienne Schodki („stone steps” alley), Barbican with the defensive walls, Jan Kilinski’s statue and the Monument to the Little Insurgent. 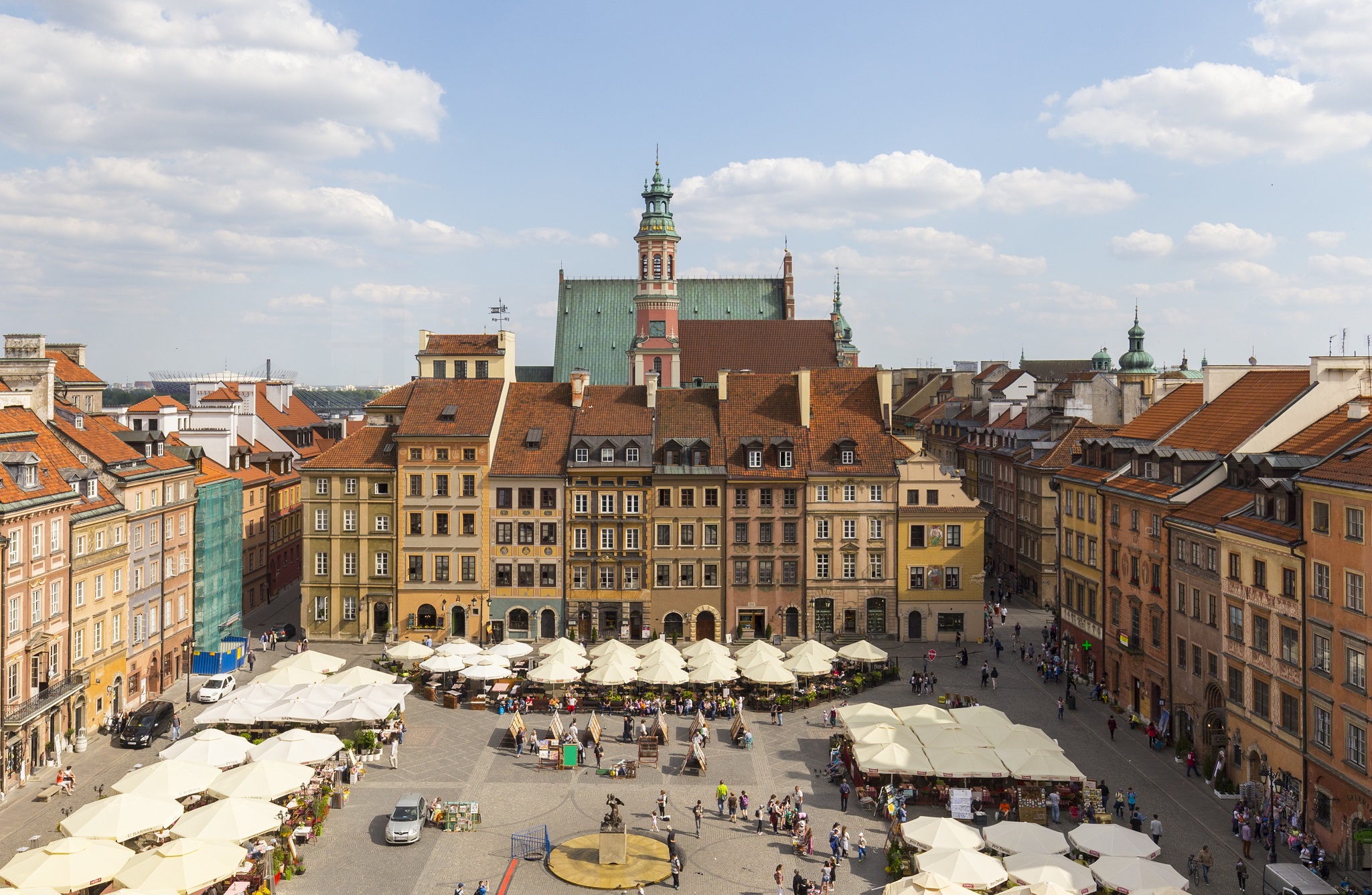 Maria Sklodowska-Curie National Research Institute of Oncology – previously the Radium Institute can be found at 15 Wawelska Street. Maria assisted at the presentation of the groundbreaking plaque in 1925. Thanks to the funding by the Polish community in the United States she was able to purchase one gram of radium for the institute. On 29th May 1932, by then twice the Noble Prize winner, Maria officially opened the clinical building of the Radium Institute in Warsaw.

Maria’s bronze statue can be found in the nearby square on the corner of Wawelska and Skłodowskiej-Curie Streets. It was designed by Ludwika Nitschowa, commissioned by Warsaw’s Mayor Stefan Starzyński in 1935. In the same spot an educational walk was created in 2011, with five informative tablets about the life and work of Maria Curie. In 2012 an impressive nearby maple tree was named after her and declared as a monument of the nature. It is believed to have been planted by her in 1932, on the day of the Institute’s opening.

Close to Wawelska street, boasting an almost central location is Warsaw’s biggest park – Pole Mokotowskie (Mokotowskie Field). In the vicinity of Warsaw School of Economics and Warsaw University of Technology, it’s students’ favourite leisure spot, equally popular within the rest of the Varsovians. Its 70 hectares of greenery completed with sports and recreational areas, are spread accross three neighbourhoods: Mokotów, Śródmieście and Ochota. 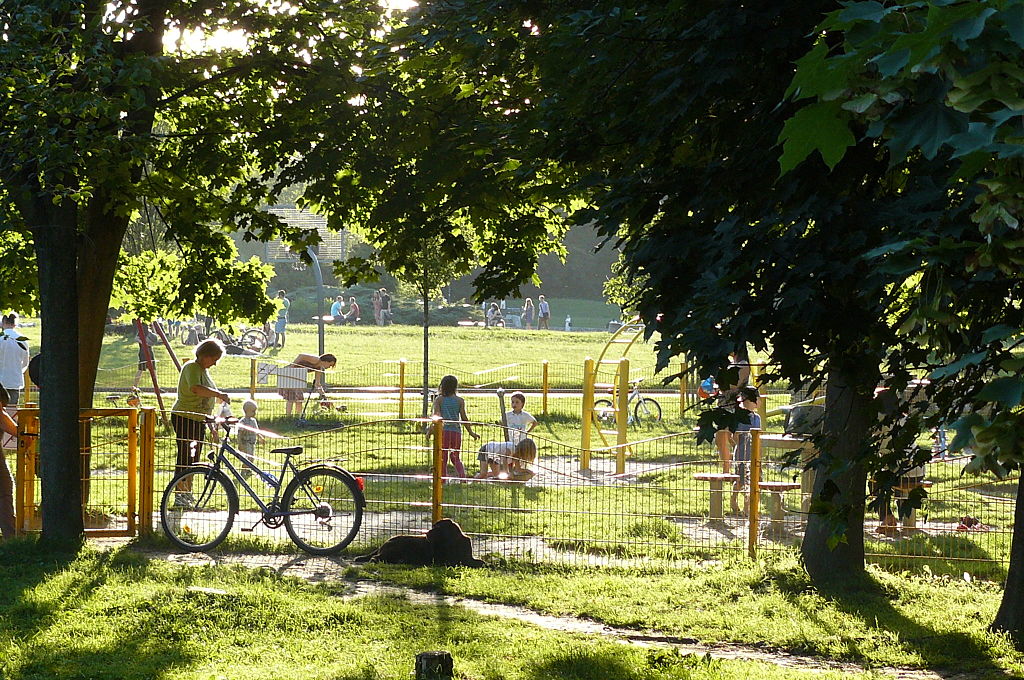